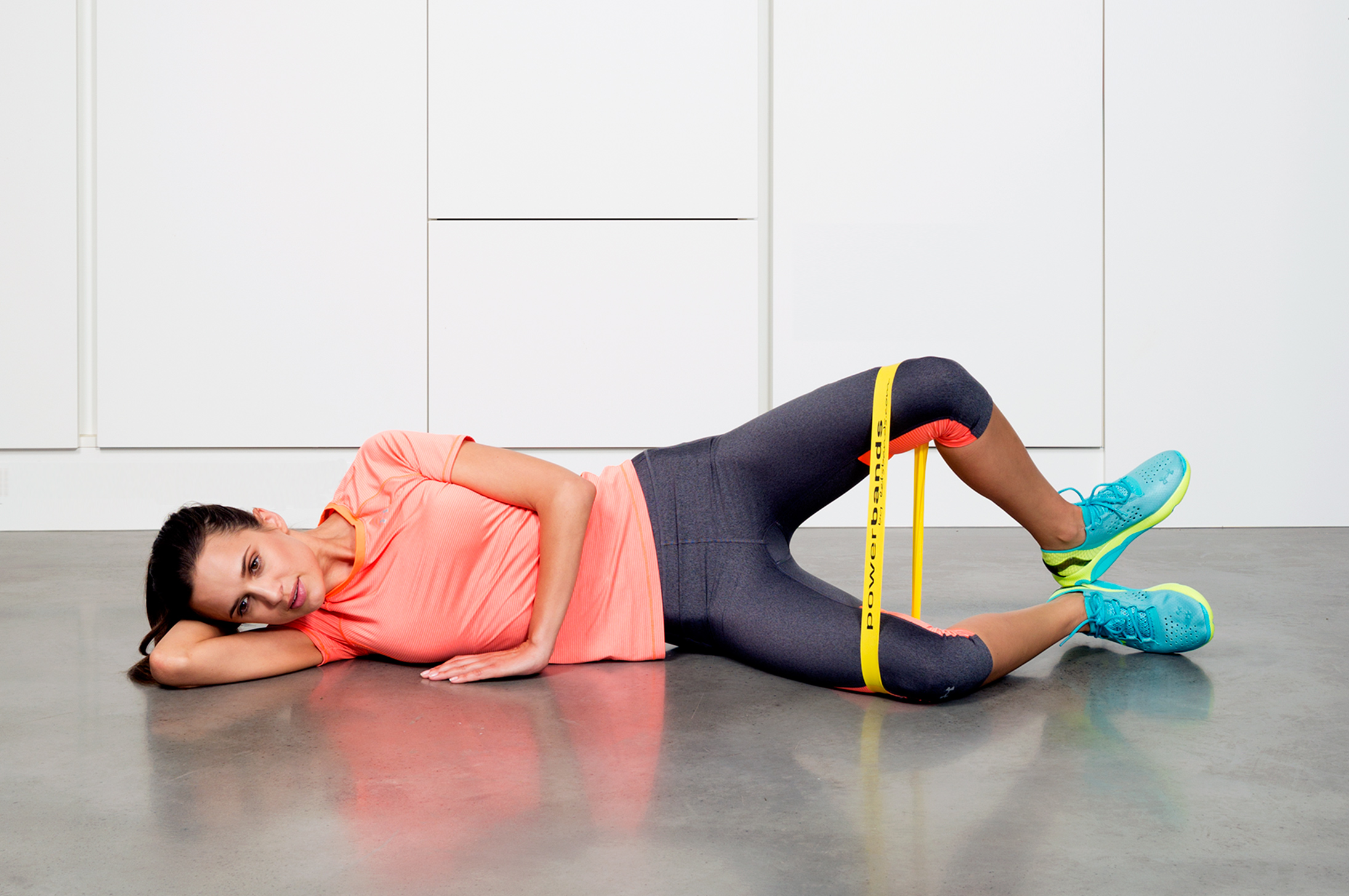 Short on time, but still need to get in a good workout? You don’t need hours in the gym to burn calories and build muscle. Grab a band and find a little free space for this intense full body routine sure to rev your metabolism.
What you need:

Your Routine
This workout is divided into heart-pumping triplets and supersets. When you see a letter indicated next to the number, perform those exercises in succession without rest.  For example, 1a., 1b., 1c. are all performed without rest until 1 set of each exercise is completed. Rest for 1 minute, and then repeat the same pattern until all sets are finished. Exercise 3 only has a superset (2 exercises) rather than a triplet.

1a. powerbands sumo deadlift: 3 sets, 12-15 reps
Place the loop band on the floor and step into the band. Move into a wide stand position, turning the toes out to a 45-degree angle. Hinge at the hip, sitting back while softening the knees until you can reach the band. Grab the band with both hands at about hip width.  Begin the movement by lifting the band until the hips and knees come to full extension and shoulders move back. Return to starting position and repeat.

1b.  powerbands stationary lunge: 3 sets, 10-12 reps each side
Place one end of the loop band under the right foot. Move feet to a staggered stance. Wrap the other end of the loop band around the shoulders and secure the band by holding each side. Lower the back knee toward the floor, keeping the front shin perpendicular to the floor. Hover slightly above the floor and return to starting position and repeat. Once all reps are repeated on the right side, repeat the same movement on the left. 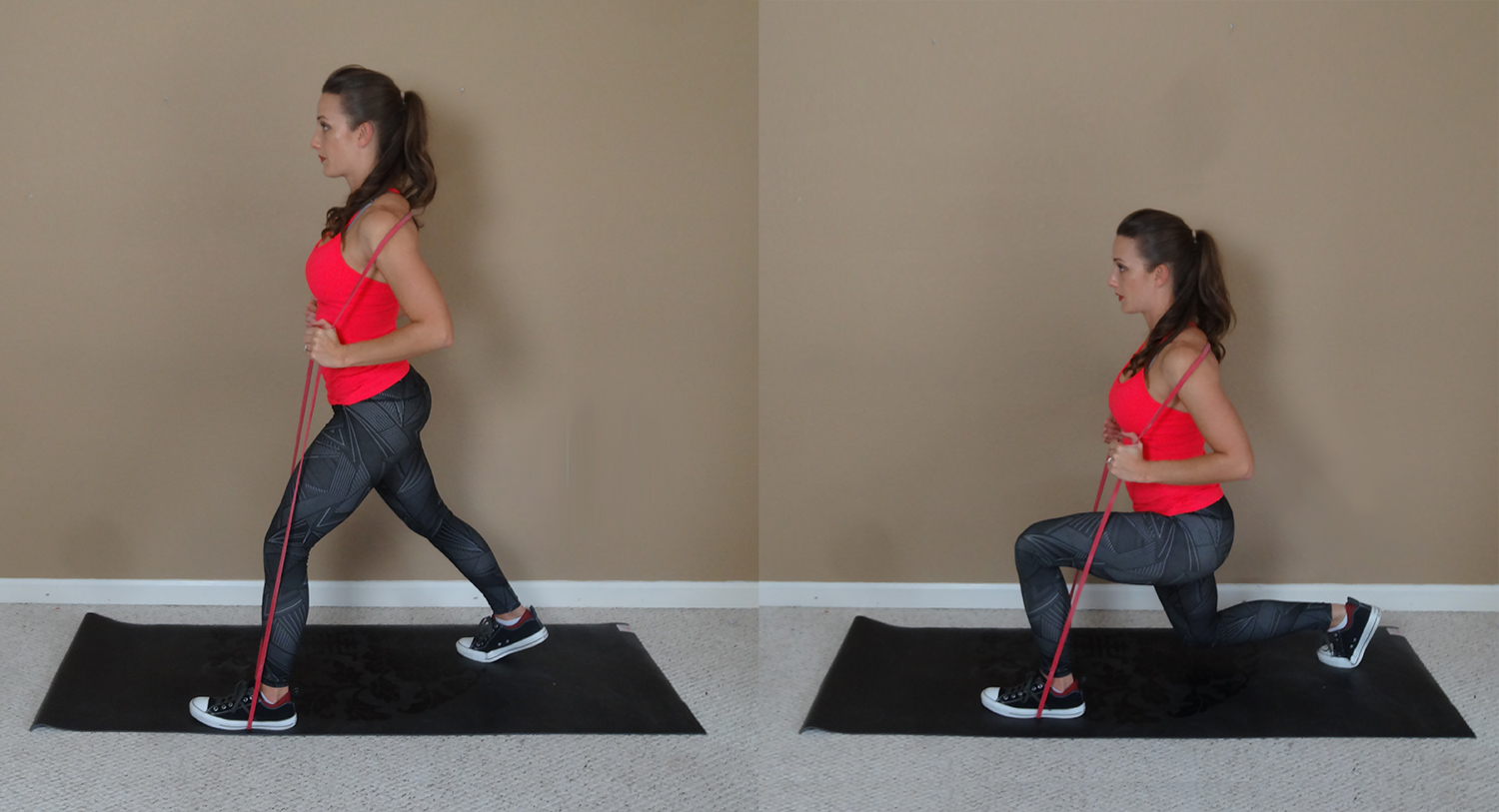 1c. powerbands push-up: 3 sets, as many reps as possible
Lie on the floor face down. Grab one end of the band in each hand, wrapping the back behind the back so it rests across the shoulders. Place hands directly under the shoulders, with elbows pointing back.  Brace the core, keeping the spine neutral. Press up against the band until arms fully extend. The torso and hips should move together. Return to starting position and repeat.

2a. powerbands Seated row: 3 sets, 12-15 reps
Sit on the floor with legs straight and toes pointed toward the ceiling. Wrap one end of the loop band around the mid-foot and grab the other end of the band with both hands. To create more resistance, grab the middle of the band. Stretch the arms toward the feet, then initiate the movement by engaging the back muscles. Move the elbow behind the body, bringing the hands to the ribs. Return to starting position and repeat.

2b. powerbands forward/rear walk: 3 sets, 10 steps forward/10steps backward on each leg
Stand over the band with feet hip width apart. Cross the band over in front of the knees. Holding the band midway down, pull the band up until the hands rest slightly above the hips. Walk forward, circling the foot inward and then out into a wide stance position. Repeat with the other foot. Once all steps forward are finished, Repeat the same motion, circling the foot inward, and out as you step backward.

2c. powerbands donkey kick: 3 sets, 12-15 reps each side
From a quadruped position with both hand and knees on the floor, place one end of the loop band around the right hand and the other end around the right foot. Bracing the floor while keeping the spine neutral, move the right foot up and back, squeezing the glute muscle, until the hip and knee are fully extended. Return to starting position and repeat.  Once all reps are completed on the right side, repeat the same movement on the left side.

3a.  powerbands reverse woodchop: 3 sets, 8-10 reps each side
Place one end of the loop band under the right foot. Move to a wide stance, athletic position. Grab the other end of the band in both hands, holding the band by the right leg. Move the arms up and across the body until the arms are in full extension over the left shoulder. Return to starting position and repeat. Once all reps are completed on the right side, repeat the same movement on the left side.

3b. Plank with hip extension: 3 sets, 8-10 reps each side
Begin in a push-up position, placing one end of the loop band around the right hand and the other end around the right foot. Bracing the core, raise the right leg to extend the hip and contract the glute muscle. Lower back down and repeat. Once all reps are completed on the right side, repeat the same movement on the left side.

To make the most of this routine, set up time to workout 3-4 days per week for a total of 6 weeks. In a little more than 1 hour per week, you will be on your way to that stronger, fitter body you deserve.

Kellie Davis is a freelance writer and blogger turned fitness coach living in Northern California. She published short fiction and essays in anthologies and literary magazines before starting a full time career as a health and fitness writer. She currently works as a contributing author to several online fitness publications, and also runs corporate blogs in the health food industry.